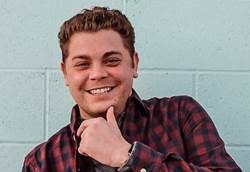 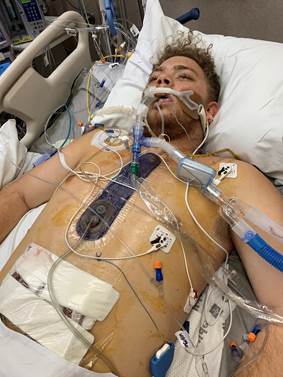 An Oklahoma college student defies death multiple times as he survives four major heart surgeries in just six weeks’ time. All the lifesaving procedures took place at INTEGRIS Health, the only health system in the region equipped to offer the wide variety of therapies needed to save this young man’s life.
Twenty-four-year-old Mason Hightower from Duncan, Okla. was born with a
congenital heart defect. He had his first open heart surgery at the age of ten. His condition appeared to be under control until Sept. 2020 when the now University of Oklahoma graduate student began having chest pain, shortness of breath and running a fever.
”I was a normal, healthy, active guy just beginning my life. I had no way of knowing how sick I would become,” Mason remembers.
Hightower went to the emergency room in Duncan but was quickly transferred to INTEGRIS Baptist Medical Center in Oklahoma City for a higher level of care.
The INTEGRIS Cardiovascular Physician team discovered Mason had a serious life-threatening infection called ‘endocarditis’. The infection was rapidly deteriorating the valves inside his heart. In fact, a small portion of infected tissue had broken off and traveled to his brain causing a series of strokes.
Hightower required emergent surgery to repair the valves. The aortic valve needed a complete replacement. It was a difficult procedure with significant risk. David Vanhooser, M.D., a thoracic and cardiovascular surgeon, was the lead surgeon.
“When I opened Mason’s heart, we found that the damage was much worse than expected. The infection had destroyed not only his two main heart valves but also the supporting fibrous structure inside the heart that held the valves in place. The infection had literally eaten away the inside of his heart,” Vanhooser declared.
Mason nearly died in surgery. Thankfully, because Hightower was at INTEGRIS Baptist Medical Center, his life was saved by a technology called ECMO, or extra corporeal membrane oxygenation.
Aly El Banayosy, M.D., the medical director of the Advanced Critical Care and ECMO Program at INTEGRIS Health confirms, “ECMO therapy came at the perfect time for Mason. He is a true miracle and I was honored to work alongside colleagues and staff to provide Mason with the very best care possible and a second chance at life. He really did come to the right place at the right time.”
While on ECMO, Hightower underwent a second surgery which confirmed his heart was in deed destroyed and there was no hope for its recovery. Vanhooser gave Mason’s parents the dismal prognosis that he might not make it through the night.
“It was terrifying, the worst thing I have ever gone through,” says Jeanine Hightower, Mason’s mother. “I remember pleading with the doctors and nurses to try everything in their power to save my son. I told them he was a fighter, and if they didn’t give up on him – he wouldn’t give up on them.”
ECMO support was able to buy Mason enough time for the team to evaluate whether he could be transitioned to heart transplant, or if he could be bridged to one of the many mechanical support device options available at INTEGRIS Advanced Cardiac Care.
Due to Hightower’s complete heart failure and the acuity of his illness, the best option available was to have his heart replaced by a Total Artificial Heart, a therapy that is only offered by a handful of centers in the country. On Oct. 7, Mason was implanted with a TAH by Vanhooser and James Long, M.D., the medical director of the Nazih Zuhdi Transplant Institute and Advanced Cardiac Care.
“Although the total artificial heart could keep Mason alive for an indefinite period of time,” states Vanhooser. “We knew this was not the final solution for a 24-year-old graduate student, with years yet to live.”
With his artificial heart, Hightower was able to gain enough strength to be considered a suitable candidate for heart transplant. He was placed on the transplant list Oct. 26. Three weeks later, he would receive the perfect donor heart.
This young man went through a lot in a very short amount of time,” Vanhooser declares. “There were definite ups and downs along the way, but Mason rallied and recovered each and every time. I have no doubt there was a higher power watching over Mason. It became very apparent that it was not his time to go.”
“We clung to our faith, family and friends. That’s the only way we got through this,” says Jeanine. “I know that God led us to INTEGRIS. This is the only place in town my son could get absolutely everything he needed to survive all under one roof. That is no accident.”
Mason remained hospitalized until Dec. 23. He was discharged just in time to spend Christmas at home. He continues to thrive to this day. “Mason is doing great. He and his wonderfully supportive family have been an inspiration to all of us,” says David Nelson, M.D., the chief of the Heart Transplant Program at INTEGRIS Health.
For Mason, the future is full of opportunity. “I will be forever grateful to the many doctors, nurses and staff who cared for me. I always felt love and encouragement from them. Now, I get to spend the rest of my life trying to figure out why I was spared. I know God has a plan for me and I can’t wait to discover my purpose.”