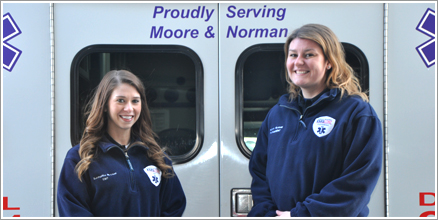 Two EMSSTAT employees were honored at the Norman Crime Stoppers Public Safety Awards Banquet on January 28, 2016.
Samantha Russell was named Emergency Vehicle Operator (EVO/EMT) of the Year and Kayla Russell was named Paramedic of the Year at the banquet.
Samantha “Sam” Russell goes above-and-beyond the standards for her job including consistently volunteering for shifts, being a positive role model for others, and learning how to properly run Advanced Life Support (ALS) calls, said Eddie Sims, Manager of EMSSTAT.
“Sam is universally admired by her partners and patients,” Sims said.
Samantha graduated from nursing school and will remain with EMSSTAT on an as-needed basis while also beginning a new career as a registered nurse at the Norman Regional HealthPlex Emergency Department.
Kayla Russell began working as an EVO at EMSSTAT in December 2014 and became a paramedic after finishing paramedic school. Kayla is committed to helping others with their education and hosts a weekly study group for new paramedics.
“Kayla has been doing this on her own time, giving up one of her days off to help our paramedic recruits study and prepare for their protocol talks,” Sims said. “Kayla does not do this for any other reason than because she cares about our patients and her co-workers.”
Kayla also has been instrumental in the process of expanding EMSSTAT’s services to Moore, Okla. and setting up the new station in that community. Because of her positive attitude and hard work, Kayla was promoted to the position of Field Training Officer.
Both women are also EMSSTAT’s “STAR of Life” nominees for the Oklahoma Ambulance Association’s Star of Life banquet, which is held in March 2016.