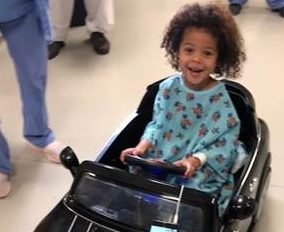 Kids are racing through the halls of INTEGRIS Baptist Medical Center in new remote control cars. It’s all part of an ongoing effort to make the hospital less intimidating to children.
The Delta Theta Chi sorority donated the cars to INTEGRIS Children’s to help transport kids to surgery and other procedures. Ashley Ochs, M.A., CCLS, is a child life specialist at INTEGRIS. She says the idea is to make an otherwise scary situation more positive.
“Traditionally kids would be wheeled into surgery either in their hospital bed or carried by a staff member, which can be frightening because they don’t know what’s going on or where they’re going. Even though we tell them and show them pictures before taking them, it’s still scary to have to leave your parents to go to the operating room. But with the cars, it’s fun and exciting. They even get to listen to their favorite song as they go, like they would on a car radio.”
Even though the cars were just recently revealed, Paul Digoy, M.D., a pediatric ENT at INTEGRIS, says they are already making a big impact.
“These kids are in a new environment. Often they’re scared or anxious and they don’t know a lot of the people around them. So the cars seem to take their mind off what is happening and gets them to the operating room in a non-stressful way. And we know that how children go to sleep predicts how they wake up. This means a child who goes to sleep scared under anesthesia, will wake up the same way. But if a child goes under happy and comfortable they tend to wake up with less crying and concern.”
He adds, “I think the cars are making a huge difference. The only hard part now, is getting them out of the car. I think this is going to be a game changer for us.”
The cars not only make the experience more positive for the children, but for the parents as well. “Sometimes parents are more worried than their children,” admits Digoy. “Then to see their child being taken into surgery crying and visibly upset, it can be heart wrenching for them.”
Ochs agrees, “Parents have been vocal about how much better this experience has been compared to past experiences. They’ve been relieved to see their child head to surgery with a smile on their face.”
While the kids think they’re really driving the cars, they’re actually being operated remotely by a near-by nurse. Seat-belts are even included for extra safety. The cars are intended for younger children, but older kids can use them as long as they are able to fit inside.
There are three cars in total, two in the surgery department and one in the pediatric department to take kids to procedures like blood draws and X-rays.