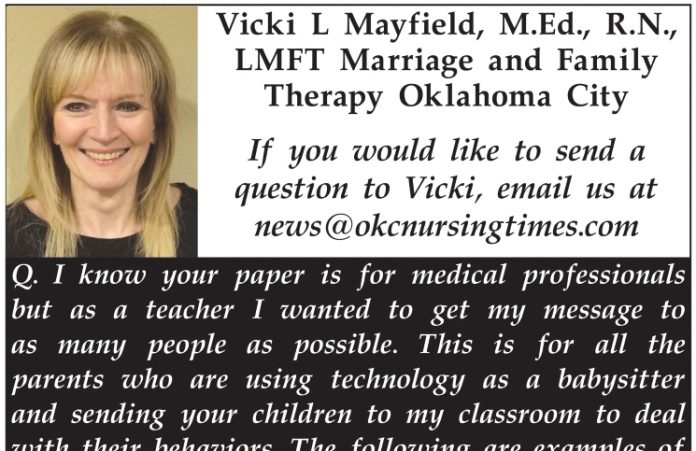 Q. I know your paper is for medical professionals but as a teacher I wanted to get my message to as many people as possible. This is for all the parents who are using technology as a babysitter and sending your children to my classroom to deal with their behaviors. The following are examples of this problem.

A. Charlie – age 5  – preschool
While out on the playground Charlie had an altercation with a young male peer and stated, “If you do that again, I am going to kill you.” The other little boy was scared of Charlie and reported this situation to the playground teacher. There had been one previous problem with Charlie being physically aggressive.
When the teacher met with Charlie’s mother to discuss expelling him from preschool she was surprised the school would take such drastic measures. She did admit that Charlie “played on his phone a lot.” His teacher said Charlie was focused on acting out the fantasy of the games he was playing and feared that he could lose touch with appropriate behaviors and boundaries.
In order for Charlie to remain in school his mother had to agree that Charlie would not have access to a phone or any other device to watch and play games. She was encouraged to actively engage Charlie in appropriate age related games and activities, which were somewhat foreign to him.
Taylor  –  age 7 – 2nd grade
When Taylor’s phone was taken from her during English, for the 3rd time, her teacher called a conference with her parents. They were somewhat uninterested in the teacher’s concerns that Taylor’s grades were below average, she was easily distracted and oppositional to authority. They said that it was difficult to get her to do her homework and she often stayed up late playing on her phone which affected her sleep.
They presented as somewhat helpless to setting rules and sticking by them. This 7 year old was running the house and her parents. Then she came to school and tried to run the teacher.
These are just two of the many situations that have presented themselves in the classroom and playground. As teachers we are extremely concerned that parents have normalized the use of cell phones and other forms of technology as babysitters, something to keep their children busy and “out of their hair.” We need teamwork in order for this problem to get fixed. We are not excited about children missing out on their education because they are lost in fantasy.
When children as young as 5 use the word “play” to describe activities on their phones and show no interest in “playing” with legos, dolls, or swinging in the park, we have a BIG problem.