A lot of patients who go to Mercy Clinic Pain Management in Oklahoma City think the clinic is only a place to be prescribed medicine to alleviate pain, said Tammy Stolte, a certified medical assistant who has been with Mercy for nearly six years, two of those years with Dr. Arthur Beacham. But the pain clinic is much more comprehensive and offers much more, she said.
“We do a lot of injections in the office,” she said. “If it’s muscle pain, we’ll do trigger-point injections right here in the office,” Stolte said. There’s physical therapy and a lot that can be done for pain besides prescribe medicine, she said.
“I think sometimes if we listen to the doctor and trust him, sometimes we get a lot of people off these high amounts of pain medication and they actually feel better.”
Some people also develop a resistance to opioids, she said. Patients need not be on pain medicine indefinitely when it is of no help, she said. To keep opioid dependence from happening, every patient is interviewed to determine if they are a candidate for the drug.
“We do have a lot of other things besides that,” she said. “If he agrees to take them as a patient, we’ll do an initial urine screening and if that comes back okay, we have them go ahead and sign a contract.”
Random pill counts and urine screenings are taken into consideration. A few patients are afraid not to take their medicine, even when they don’t need it, she said. But the majority of Mercy Clinic Pain Management patients do what they are supposed to do. She said that Dr. Beacham explains to patients not to take their opioid medicine when they don’t need it.
“I really like our patients,” Stolte said. “We don’t have any problems with them. They come in they take their medicine properly.”
The clinic also offers nerve block stimulation, in which if found appropriate, a stimulator will be implanted in their body to relieve back pain. The stimulator requires a psychological approval process so that insurance will pay for it, she said.
“They do a lot of things to make sure the patient is actually going to benefit from it before they actually do the implant,” Stolte explained.
Steroid injections are an outpatient procedure done at the hospital, she said. There are several different types including lumbar, cervical, and sometimes thoracic, Stolte said.
With the help of ultrasound, a steroid epidermal injection is given for pain relief. The clinic has had a lot of success with the epidermal injections that are often helpful to manage pain from a ruptured or bulging disc due to degenerative disease, Stolte said.
“If they work well for the lower back, they’ll do a lumbar spinal epidermal. If those work and they get some relief from them, they’ll go back in and burn the nerve,” she said. “And it lasts longer. Some people get up to a year of relief from them.”
The steroid injection is done before the lumbar spinal epidermal, just to see if it works. Then they’ll do the ablation if success has been noted with steroid therapy, Stolte continued. The procedure is called radio frequency nerve ablation. It involves chemically burning a nerve, Stolte said.
“Some people don’t get as much relief. It’s really an individual thing,” she said.
Stolte has worked with five different doctors since she has been with Mercy. The clinic is west of Mercy Hospital in northwest Oklahoma City in close proximity to her home.
“It’s actually been my favorite job as far as nursing that I’ve had so far,” she said. The physicians blend humor with their work, she said.
“It’s pain management. It’s not just pills.”
Pain management has been her favorite job, she said. The job is highly focused because it specializes only on pain, said Stolte, a graduate of Francis Tuttle.
Stolte is not a nurse but always wanted to be one. Her mom was a registered nurse who worked at Mercy.
“I’ve always wanted to be in health care and I’ve loved it,” she said. “It’s been really rewarding. It’s fun to watch Dr. Beacham and Dr. Ellis. We’ve developed this routine. We’re just like a family here in this office. 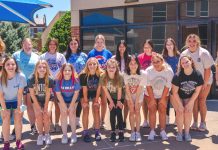 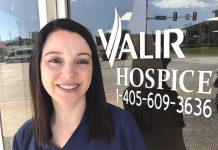