Not too terribly long ago, Holly Wennersten’s day revolved around a keyboard, a mouse and a computer screen.
But after a quarter century managing computer software, Wennersten wanted to take a more hands-on approach with her work.
And she also decided to swap the ones and zeroes for something more worthwhile – helping people heal.
The Integris Health Edmond registered nurse now problem solves in the hospital’s emergency department.
“I just like helping people,” she said. “Typically, when people come to the ER they’re sick. If you can help people feel better or even just figure out what’s wrong sometimes people just want to know what’s wrong. Whether it’s a good or bad thing once they know what’s wrong they feel better.”
More than five years ago Wennersten worked labor and delivery. She wanted to expand her scope of knowledge and work with a broader range of people.
No ER nurse will deny that a broad range is exactly what you get every shift.
“It’s actually more similar than people think because basically you never know what’s walking in the door,” she said of the two nursing fields she’s experienced. “You’ve got to be prepared to handle whatever. I think people imagine labor and delivery as just sitting there holding babies.”
Sitting doesn’t happen much anymore for Wennersten, who is working on her nurse practitioner license. The focus is to one day to return to the ER with her new skillset.
“You see so many different things. You have to have such a broad scope of knowledge,” said the University of South Alabama student.
Wennersten is a former nurse of the year for her department, a fact that blew her away when her manager told her. She also earned a seat on the hospital’s council of excellence, which helps steer the hospital from a nursing standpoint.
“It definitely helps me instead of just being focused on the nursing to focus on the process of making sure patients are getting everything they need and communicating with ICU,” she said. “It’s kind of a broader scope of the hospital, the patient care throughout their stay.”
Now that she’s had the proverbial 30,000-foot view of Integris Health Edmond, Wennersten admits she approaches shifts differently.
“I do try to do that but it’s very difficult. I’ve shadowed physicians a couple times – their way of thinking is definitely different than the nurse’s way of thinking as far as what they try to eliminate. I was really surprised at how different that was,” Wennersten said.
“But it’s difficult when you’re a nurse.”
Wennersten had never worked at another ER. She already likes where she’s at.
“Teamwork and management definitely. We have great people that work there,” said Wennersten, whose department can range from just a few patients a day to many, many more. “We’re small but that doesn’t prevent a stroke coming in or a nurse being one-on-one.”
The hospital’s emergency department has the capability of 17 rooms to be active.
Wennersten is in her seventh year of nursing after graduating from the accelerated program at Oklahoma City Community College. Prior to that she spent 25 years working with computers.
Programming, network development manager, software development manager were all hats Wennersten has worn.
“I liked it,” she said. “Computers are kind of like electricity and when you flip the light switch on you expect it to come on and if it doesn’t you’re very angry. You don’t appreciate what goes on behind the scenes.
“With medical, people appreciate it when you help them and when you fix them and you tell them what’s wrong.”
Admittedly with a touch of attention deficit disorder, Wennersten has found she enjoys the multiple tasks she’s called on each day to perform.
“I have a very inquisitive mind and I want to know why. I like medicine,” she said. “I was interested in medicine when I was young but I just didn’t go that way.”
This past year, Integris announced a massive expansion that will more than double the complex in size, adding 64 new inpatient rooms.
The campus – nestled in a tree-line stretch just east of I-35 – will grow five stories in some areas.
“Our commitment, from the time we opened our Integris Health Edmond campus six years ago, was to grow our facilities and its services to meet the needs of a growing community,” said Avilla Williams, president of Integris Health Edmond, in a release.
The project will add some 143,000 square feet of additional space in three sections of the main hospital.
The hospital currently has 40 inpatient beds that include 24 private surgery rooms, six intensive care units and 10 beds in the women’s unit.
Expansion will increase total bed capacity to 104 beds once construction is finished. 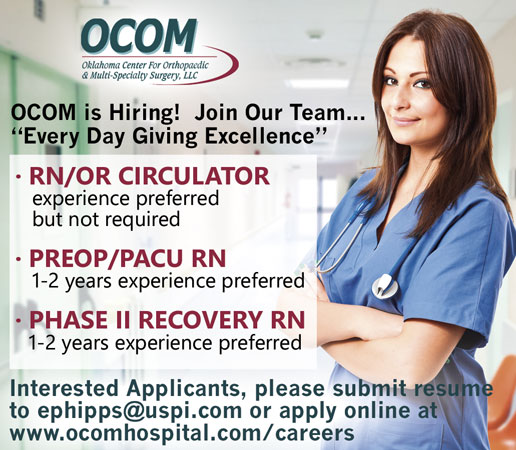 OCOM is Hiring! Join Our Team…. “Every Day Giving Excellence”