Nancy McCurdy smiles when the words come out of her mouth.
She smiles because she’s comfortable in the fact that she’s following in her mother’s footsteps as a resident of Tealridge Retirement Community.
Nestled right on the 200-acre Oklahoma Chrisitan campus is Tealridge Retirement Community, a full-service, private and locally-owned community providing independent, assisted living & memory care services to the Community of Edmond.
Nancy McCurdy’s mother, Velma LaFaver, was a charter member of the Tealridge Community back in 1990, likely the third or fourth resident to move in.
When she moved in there was a nondescript pew in the common area.
“Our grandkids thought it was great and they would go down and play on it and have a good time,” McCurdy said.
A few years later, Tealridge held a garage sale to benefit the activity fund.
Mccurdy and her husband noticed the pew was for sale. Nancy told John to load it up and the pew wound up in the couple’s home and eventually playhouse.
The kids continued to play on it growing up.
When the time came to downsize and the McCurdys to make their next move it was the couple’s decision to move to Tealridge.
It was John’s idea to take the pew.
206D was McCurdy’s mother’s room. The McCurdy’s now live a floor above.
“We have a similar view to what she had,” she said. “We’ve come full circle.”
Nancy McCurdy’s mother hailed from southwestern Oklahoma – Lone Wolf to be exact. The move to the big city was a planned one.
“We were very pleased and happy and so far we’ve been very pleased with Tealridge,” Nancy McCurdy said.
The McCurdy’s visited several places but they both kept coming back to Tealridge, which was only two miles away from their current residence. They’ve lived in Edmond for 33 years.
One of their daughters lives nearby.
They hired Senior Transitions, a local moving company catering to seniors making a move, to get everything – pew included – moved over.
ROOM WITH A VIEW
There’s something special about looking out the window of the McCurdy’s apartment.
Knowing her mother looked out over the same pond, filled with fish and ducks, has a calming effect on her.
Nancy McCurdy was a registered nurse by trade. She helped found the Hope Center Clinic of Edmond, an organization helping those in crisis in the area.
“They decided they wanted to start a clinic and I had been in health education for a long time,” she explained. “I got the job and we started this clinic. It helped people who didn’t have insurance, mainly pregnant women.”
McCurdy took care of hundreds of her fellow Edmondites.
She failed at retirement the first time, going back for another four years.
“I’ve always been in nursing,” said the 40-plus-year nurse. “When I retired the last time I told them that was it.”
John dated Nancy while she was attending the Mercy School of Nursing in downtown Oklahoma CIty at 12th and Walker. The Granite native met Nancy in southwestern Oklahoma but transferred to the University of Oklahoma to be closer to her.
He graduated with a degree in industrial engineering.
The two wed when he moved back after a semester. Nancy quit school briefly.
He worked for Phillips Petroleum in Bartlesville. He found a better fit at Tinker Air Force Base before earning his Master’s degree from the Air Force Institute of Technology in Dayton, Ohio.
Wright Patterson Air Force Base was his next job site and also where Nancy finished her RN degree.
The two raised four children in the Dayton area.
After 15 years of cold weather the McCurdys moved back to Oklahoma and settled into Edmond.
“One of the reasons we moved back was to be closer to our parents and our relatives,” said Nancy, who sent two of her children through nearby Oklahoma Christian University. “This has been our home ever since.”
John actually worked for Tealridge, putting his commercial driver’s license to drive residents
“I enjoyed that,” he said. “I don’t know if the residents did but I did.”
And so when the time care Tealridge seemed like a natural fit, for Nancy’s mother and for her and her husband.
“She loved every minute of it,” Nancy said. “We were really concerned about her making an adjustment but when she got here they played bridge and did all the things she liked to do and she really enjoyed it. We were really happy with that move.
“We plan to be happy with our move, too.” 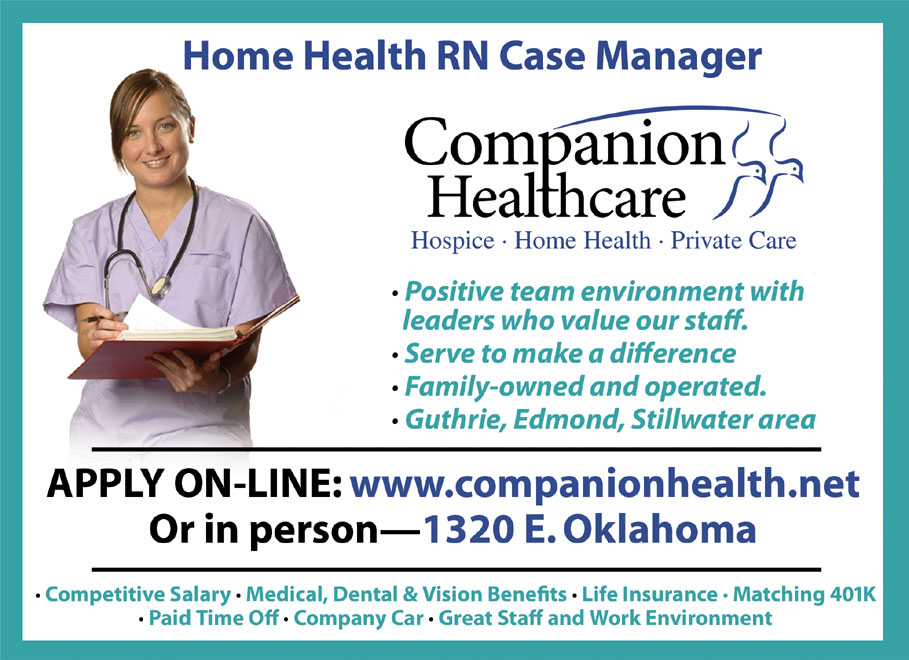