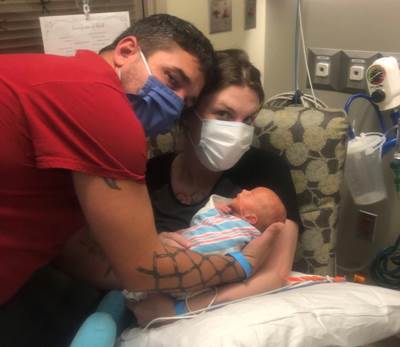 INTEGRIS Health is seeing an alarming increase in the number of pregnant women testing positive for COVID-19. Prior to June 30, the Women’s Center at INTEGRIS Baptist Medical Center had cared for zero COVID positive expectant mothers. Fast forward to August 10, and the center has now delivered babies from 24 COVID positive women. (story continues below)

Most of these women have been asymptomatic carriers, but a few of them have experienced critical illness. Thirty-five-year-old Carly McKenzie was one of them.
“Not only was Carly pregnant but she also has cancer, so we were being extra vigilant,” says her husband Christopher McKenzie. “We didn’t go anywhere or see anyone. We were shocked when she was diagnosed with COVID-19.”
“It started with a mild cough,” describes Carly McKenzie. “And it just progressively got worse. It hurt to breathe. But honestly, I was more worried about my unborn baby than myself.”
Carly was admitted to INTEGRIS Southwest Medical Center on June 27. She was put on a ventilator June 28. She was transferred to INTEGRIS Baptist Medical Center July 1.
Carly’s condition quickly deteriorated. Her situation became so dire, that she required extracorporeal membrane oxygenation, commonly abbreviated as ECMO, in order to survive. The specialized therapy is reserved for patients facing imminent death.
“ECMO provides support to patients whose heart and/or lungs are so severely diseased or damaged that they can no longer serve their function,” says Aly El Banayosy, M.D., Director of the INTEGRIS ECMO Program and Network. “The goal is to allow the heart or lungs to rest and recover while the machine does all the work. When the heart or the lungs have healed and can work on their own, the lifesaving support of the ECMO artificial heart/lung machine is weaned then removed. Carly was on the device for five agonizing days. We really didn’t expect her to survive.”
While Carly was on ECMO support and in a medically induced coma, baby Oliver was delivered via cesarean section. He was born 2 and a half months early at just 29 weeks gestation, weighing only 2 pounds, 13 ounces. “All I could think about was that Carly might not ever get to meet our son and that I might have to raise two kids under the age of two alone. It was very emotional and terrifying,” remembers Christopher.
“You may think it won’t happen to you or that you would be fine if it did. But think about people like my wife. By doing what you’re supposed to do like staying away from others and wearing a mask – you literally could be saving someone’s life.”
“Miraculously, thanks to my faith and to the exceptional care I received at INTEGRIS, I recovered and beat this horrible disease,” says Carly. “I want everyone to know that COVID is not a joke and that it should be taken very seriously.”
As for Baby Oliver, he tested negative for the coronavirus but has spent five weeks in the Neonatal Intensive Care Unit at INTEGRIS Children’s. Thankfully he is doing well and gaining weight. Because of being in quarantine, Carly didn’t get to officially meet her son until July 29. “It was amazing,” she says. “Even though I just met him, I feel like we have already been through so much together and beaten the odds.”
Oliver’s big sister, 18-month-old Audrey, still hasn’t got to meet him in person since young children aren’t allowed in the NICU due to COVID. But hopefully she will very soon when he gets to go home in a few weeks.
While the health system has not had any maternal or fetal deaths related to COVID-19, the INTEGRIS staff hopes others will take the McKenzie’s story to heart. “It’s important to understand that pregnant women can and do get critically ill from COVID-19,” states Whitney Homer, the Nurse Manager of the INTEGRIS Baptist Women’s Center. “The advice we give our patients is to create a protective bubble around you and your unborn baby. Do the same for all those in your household. Wear your mask, social distance and wash your hands.”
To date, INTEGRIS has had to put 23 COVID patients on ECMO, with more than 50% of those transferred to INTEGRIS from other hospitals around the state of Oklahoma. Two of those have been young pregnant women.