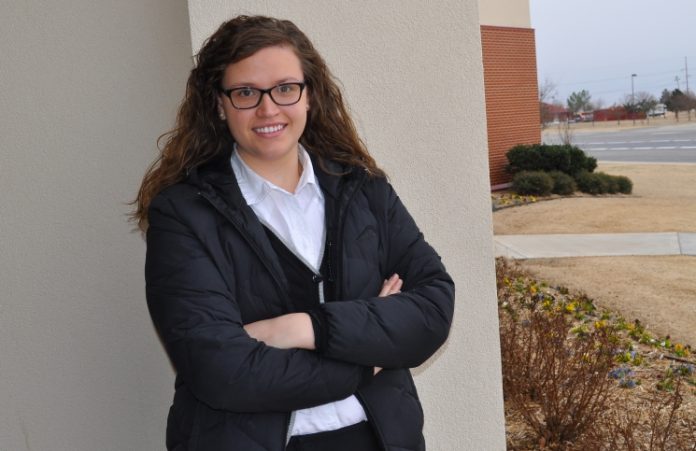 Terra Corley never saw herself as a leader until she suddenly became one. Now, the president of the Oklahoma Nursing Student Association says becoming involved in leadership in her chosen field of nursing is one of the best things that could have happened to her.
Corley is a recent Oklahoma City Community College grade Careers and matriculated from OKC’s Classen School of Advanced Studies.
She became involved with the association through wholesale NFL jerseys a friend from OCCC who attended the annual convention, ran from the floor and was elected to leadership.
Corley reluctantly world! accepted a co-public relations role a few months later.
She credits Magnificent that role with changing her outlook on herself and her career.
“I like that it changed me in the fact it gave me opportunities to speak to students and employers at different hospitals,” Corley said. “It really turned me into a pretty great leader when I was able to speak to people more easily. I loved the networking.”
Networking is a major advantage of the ONSA.
The group meets once a month on a Saturday in either Tulsa or Oklahoma City. In Tulsa, the group meets at the University of Oklahoma-Tulsa Schusterman Center. The OU School of Nursing hosts the Oklahoma City meetings.
ONSA directors visit the different nursing schools around the state.
One of Corley’s main goals is to to bring more hospitals and schools to the organization’s annual convention in October.
“They love coming to our convention,” Corley said of employers. “The Oklahoma Nurses Association holds its annual convention right before us. I believe we get more vendors and they love coming to the student convention because they know we have more than 500 people come every year.”
Corley’s organization used the National Center for Employee Development in Norman this past year for its convention. The group will return there this fall.
“The biggest things people like are the breakout sessions,” Corley said. “It’s a wide variety of topics. We had a neuro ICU nurse come to talk about her experience and what it takes and how to get a CCRN designation.
“The other big part wholesale NBA jerseys is the vendor hall. This year we had 28 vendors from the Army, Navy and different hospitals all over Oklahoma.”
The appeal of having 500 soon-to-be Before nurses in one location is a big plus for recruiters.
“It gives (employers) the opportunity for one day to speak to this huge group of people instead of having to find new workers elsewhere,” Corley said. “These are students and good students who are responsible. It’s a good group of people for vendors to talk to.”
Prior to graduating, Corley did her clinicals at INTEGRIS Baptist and OU Medical Center.
“Before I had gone there I was a tech and they floated me to ICU and I wholesale jerseys got to work with the night shift nurses,” Corley said. “I really had time to talk to the nurses and saw what they did. A nurse took me under her wing and the way she talked to those patients really inspired me.”
“Those patients are really vulnerable and you have to be able to communicate in so many different ways. I love that.”
Students can go online to www.oknsa.org to sign up for membership. Dues are $35 per year and membership into the National Student Nurses Association is included.
“I really hope to get more k?rmay? students involved at the state level,” Corley said. “Our board meetings are open to the public but we’ve never had many students come and see first-hand. If we can educate the local cheap jerseys national student chapters they can bring it back to their schools.”