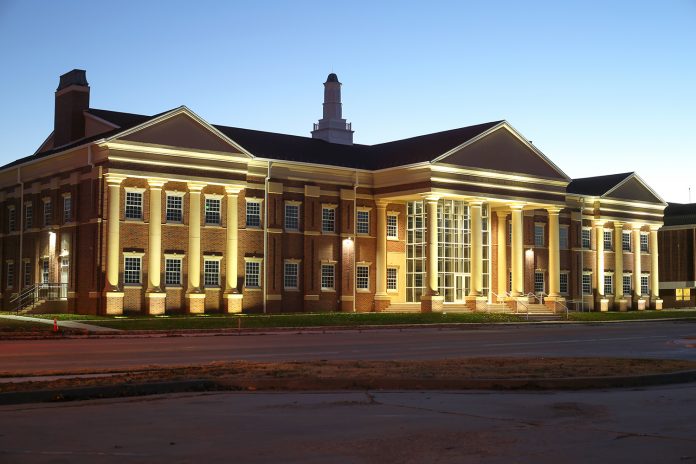 OBU will host a grand opening for its state-of-the-art nursing building, Jane E. and Nick K. Stavros Hall, Friday, Feb. 5, at 2 p.m. The building is located on the northeast corner of the OBU campus in Shawnee, just south of MacArthur Street and west of Kickapoo Street. Attendees will congregate in the Stavros Hall Foyer for the celebration.
The 32,000-square-foot facility is the new home to the OBU College of Nursing and is designed to provide cutting-edge nursing education for both undergraduate and graduate-level students.
Stavros Hall includes five classrooms, a 109-seat lecture hall and a computer lab, as well as spaces for students to study, meet and interact with faculty. The facility features six high-fidelity skills simulation labs, a medium skills lab, a health assessment skills lab, and a home health and bathing training room, totaling 24 beds. The high-tech simulation labs are equipped with the industry’s most advanced medical simulation solutions.
In 2014, Nick Stavros provided the lead gift for construction of the new facility for the OBU College of Nursing in honor of his late wife, Jane, who was the daughter of Victor C. Hurt, legendary OBU athletic director and football, basketball and track coach. The building is named in their honor.
OBU’s nursing program offers a Bachelor of Science in Nursing degree, a BSN completion degree for nurses with an associate degree, an LPN to BSN degree, and a Master of Science in Nursing degree with a focus in either nursing education or global nursing.
In 1952, the Oklahoma State Board of Nursing granted OBU the approval for Oklahoma’s first baccalaureate nursing program. The inaugural class of 11 students graduated in 1956.
You can learn more about the College of Nursing by visiting the OBU website at www.okbu.edu/nursing. If you would like to share memories associated with the College of Nursing, you can share those on social media using the hashtags #OBUNursing or #StavrosHall.
With campuses in Shawnee, Oklahoma, and Oklahoma City, OBU offers 10 bachelor’s degrees with 88 fields of study and four master’s degree programs. The Christian liberal arts university has an overall enrollment of 1,986, with students from 40 states and 35 other countries. OBU has been rated as one of the top 10 regional colleges in the West by U.S. News and World Report for 24 consecutive years and has been Oklahoma’s highest rated regional college in the U.S. News rankings for 22 consecutive years. OBU is one of three universities in Oklahoma and the only private Oklahoma university listed on Great Value College’s rankings of 50 Great Affordable Colleges in the Midwest. Forbes.com consistently ranks OBU as a top university in Oklahoma and the Princeton Review has named OBU one of the best colleges and universities in the western United States for 11 consecutive years.