Amanda Claire Nichols has something to celebrate. She has worked in geriatric care since she was a 16-year-old, said Nichols, LPN, unit manager of nursing at Bradford Village, located in Edmond.
“My grandmother was an RN. I love nursing and taking care of elderly people,” Nichols said. “I was raised by the Golden Rule. You treat others how you want to be treated, and some day I’m going to be here.
Her grandmother helped to inspire Nichol’s career. When she died Nichols was 17. Her nursing trajectory took off after that. She knew that she would become a nurse.
Nichols is a 2005 graduate of Platt College in Oklahoma City. And she has served the residents at Bradford Village for nearly two years.
“It feels great to give back because she went through a lot of health care crisis with her disease process,” Nichols said. “She had pulmonary fibrosis. It just was an experience and I wanted to give back. I was already working as a nurse aide.”
Every day, Nichols and the nursing staff at Bradford Village strives to give the best quality of care to the residents at Bradford as well as those in the skilled nursing unit.
“I like to make them happy. Even if it’s a simple smile. It goes so far,” Nichols said.
She loves everything about the residents, even if it is something little, she said. Teamwork among the nursing staff magnifies the love throughout the facility. It helps spread the sunshine.
“We have a saying and they call me the cheerleader. We say ‘Teamwork makes the dream work,” Nichols said.
She has had a lot of family members tell her they cannot thank her enough for the exemplary care she provides their loved ones.
“That’s always stuck with me and made me want to better,” she said of setting an example for all the nursing staff.
“I try to show them when I go out on the floor that we’re a team. We can get this done and make the residents happy. It’s all about customer service. Let’s get it done properly. Let’s make it the best we can,” said Nichols, who plans to study for her bachelor’s degree in nursing.
Her values in life come from her parents — a registered nurse and a firefighter. Nichols said she couldn’t have been blessed better in her life. They always told her, “Share the wealth. A smile is better than a frown. Turn that frown upside down.”
Nichols is amazed how far a positive attitude spreads in life
“Everybody else becomes positive like sunshine. And if feels good,” she said.
Nichols only tries harder when there is a challenge. Negativity is like wildfire, she continued. She tells the staff, “There’s no problem we can’t figure out. Remember the good people make our success. Let’s look for the good. Let’s fix this problem.”
Along with her grandmother, she also credits her mother’s values as a nurse for inspiring her career.
Adapting to living in a nursing home can be a challenge for some people when they have lived independently for many years.
“I always thought it was neat that they could help people,” Nichols said. “It’s such a rewarding job. Even my dad being a firefighter – he teaches fire rescue classes now since he retired.”
Nichols said she has found a team of leaders coming together to build success.
“I love the Brookdale saying, ‘Take pride in ownership of everything you do,’” Nichols said. 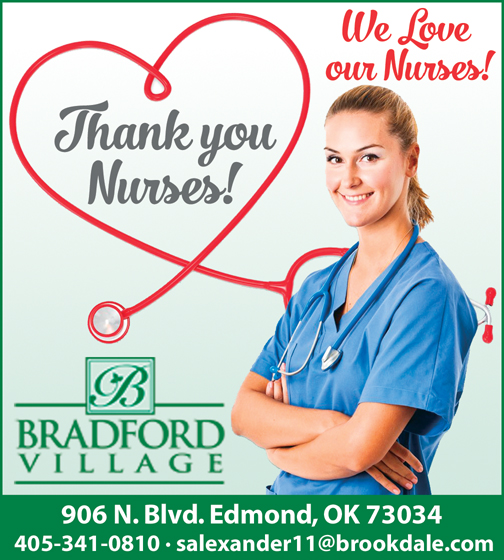