Karen Stowers, RN, has worn many hats during her 12 years with Carter Healthcare.
Years ago she opened a new office in Ardmore as a clinical coordinator. She’s been at the bedside and in the boardroom.
“I’ve done everything here,” she jokes.
Along the way she was the assistant director of nursing before she accepted the director of nursing role three years ago.
She laughs at her longevity and smiles when asked the reason behind it.
“Because I believe in the mission of the company and I believe in Stan Carter,” Stowers said, referencing the company’s founder and president.
Stowers began her nursing career in the trenches in the ER. She was a S.A.N.E nurse for a number of years.
Her passion was always helping the most vulnerable.
“As you age a little bit you start seeing where you can have the biggest impact,” she said. “Coming to the geriatric population … I fell in love with it. I’ll retire from here.”
A little over a decade ago was when she met Stan Carter and fell in love with the Carter Way.
“We expect them to have an impact on these patients’ lives,” Stowers said of her nurses. “We’re in the home to keep them at home and as healthy as possible. I don’t need a nurse who wants to run in and take vital signs and leave. I need a nurse who wants to go out there and make an impact.”
Stowers unfolds to each new hire the depth of the impact they can have on their patients while in their homes.
Like many many Carter employees, that mission is intensely person.
Stowers made sure her own parents were cared for my Carter nurses when they needed it.
“(Carter) is why I get to keep her in her own home,” she said. “You want to help them stay as functional within their limitations within their home as long as possible. If you can do that for someone, looking what you’ve accomplished.”
Human Resources Manager Sarah Fite only trusted Carter staff with her parents.
That staff has blossomed to nearly 1,000 employees in seven – soon to be eight – states.
UNMATCHED TRAINING
No matter where they will work across the country, Carter nurses are housed in OKC for a week of orientation and EMR training before they work with patients.
“Then they go back to their home office for precepting,” Stowers said. “We like for them to ride with another nurse for a couple weeks.”
A fully-staffed education department is available nurses to call from the field with any questions.
“We think we have a great support system. It takes every one of us to do that,” Stowers said.
And each nurse gets the opportunity to meet Stan Carter and shake his hand before they begin.
“I think they are all very much aware of his philosophy of the care we provide,” Stowers said. “We look at it as though we’re caring for our own mother.
“You’ll have staff nurses that maybe don’t buy into that, but they don’t last long here.”
At Carter Healthcare, helping people live better lives is not only the mission, it is intertwined with the culture and way of conducting business.
It is the principle on which this company was built and founded.
Helping People Live Better Lives is a simple phrase but its all-encompassing meaning is what Carter employees strive to accomplish for of all the people whose lives they affect.
The mantra is lived out by providing patients with quality, outcomes-driven care and by fostering an informed, encouraging atmosphere and assistive culture for employees.
Stowers says this supportive system not only enables employees to provide optimal patient care but to draw energy from it.
“We value them, we support them and – more than anything – we appreciate them,” Stowers said. “I don’t think it ever hurts to tell somebody as a group that they’re appreciated.” 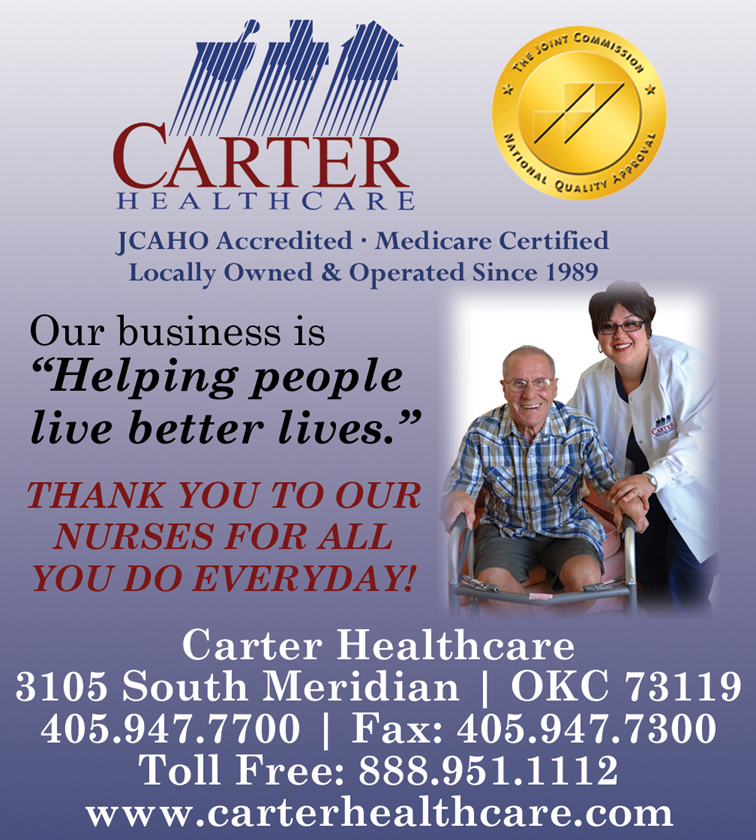