Nursing plays a major role in saving lives by working at CSL Plasma in Oklahoma City, as well as CSL Plasma centers across the state of Oklahoma and the U.S. There is a major need for plasma-derived therapies in the health care industry to treat many different diseases.
It takes interested plasma donor to come to CSL Plasma and donate plasma, the critical ingredient in therapies that treat patients suffering from a variety of rare and serious disorders such as intravenous gamma globulins for the treatment of primary immune deficiencies, shared Johnnie Phares, center manager of an Oklahoma City CSL Plasma center.
Many of those who benefit from plasma-derived medicines are very young. “For some of these kids, it can take 600 donors to make one dose of their medicine,” Phares said. Our nurses play an important role in evaluating our potential donors and verifying they meet the criteria to donate plasma, Phares added.
CSL Plasma Centers are open and the safety and protection of donors and employees are top priories. The company has instituted temperature readings, is practicing social and physical distancing and requires the wearing of facial coverings at its centers. Centers have also enhanced disinfecting procedures to ensure the safety of donors and staff.
Every time a potential donor comes in, we check all their vitals. We also test donated plasma for safety and quality, including checking plasma for various transmissible disease, Phares explained.
Being able to provide good customer service is the most meaningful aspect of Wilhem Cooper’s career, he said. Cooper, an LPN, serves as a medical supervisor at CSL Plasma.
“A typical day is getting the donors through the process safely,” he said. “And that’s from the new donor area, the reception, medical office, the donor floor and making sure we collect plasma safely.”
He makes sure the product is in the freezer on time and that the staff is following best practices. Cooper admires the concern other nurses and staff members have for the welfare of each other and the donors who provide plasma at CSL Plasma.
“You deal with people on a daily basis. The staff tends to be protective of each other,” Copper continued. So, making sure they care about each other and our donors is so important. We know that patients in our community depend on us.
Plasma donors usually have a lot of questions if they are not familiar with the donation system. They go through a screening process and have a basic health assessment given by a nurse.
Cooper said the donors want to help others to live healthier lives with the treatments they receive. In-turn for the time it takes to donate, donors can receive compensation. Donors can be as young as 18 and into their mid-60s, he said.
“It’s a win-win situation for any who donates,” Cooper said. “We try to make it as comfortable as possible.”
Cooper recalls wanting to be in the health field since he was a young boy in Liberia, in west Africa. His uncle was the only physician in his rural community. “I went through a civil war, so seeing medical staff care for people-nursing became a choice-a career I could lean towards.”
He migrated to the United State from Ivory Coast in 1996 before moving to Oklahoma for college. He attended Langston University to work towards becoming a registered nurse, but during the course of his studies, Cooper earned his LPN license. He’s been a nurse for the past 10 years. Working at CSL Plasma was the right career choice for Cooper in a competitive filed, he said.
“If you want to go into the nursing field, you have to have compassion,” Cooper said. “You’re going to have to have a well of compassion. Just having knowledge and doing basic nursing tasks can be taught but having compassion and making sure that you’re doing it for the public, yourself and the community, that’s what drives me towards nursing,” he said.
There’s a lot of challenges in helping people when illness places them at their most vulnerable state, he said.
“You’ve got to have a good set of emotions. You’ve got to have discipline and professionalism to both provide care the person needs and still be able to have that compassion, that empathy to make them feel human,” Cooper added.
The purpose of CSL Plasma is critical for the longevity of many people’s live. It is a point of light in the health care industry.
“We all have a purpose,” he said of being a nurse. Cooper said he escaped death in a civil war from starvation or a gunshot. “But that didn’t happen. I somehow survived. I got blessed in the U.S.,” he said. He spent two years in the Ivory Coast, living in a refugee camp. Now he has a stable life and good career at CSL Plasma.
“It’s more of blessing,” he said. “This is what I was called for. This is what I was blessed for.”

To find out more or join CSL Plasma OKC and Norman visit:
https://www.cslplasma.com/careers 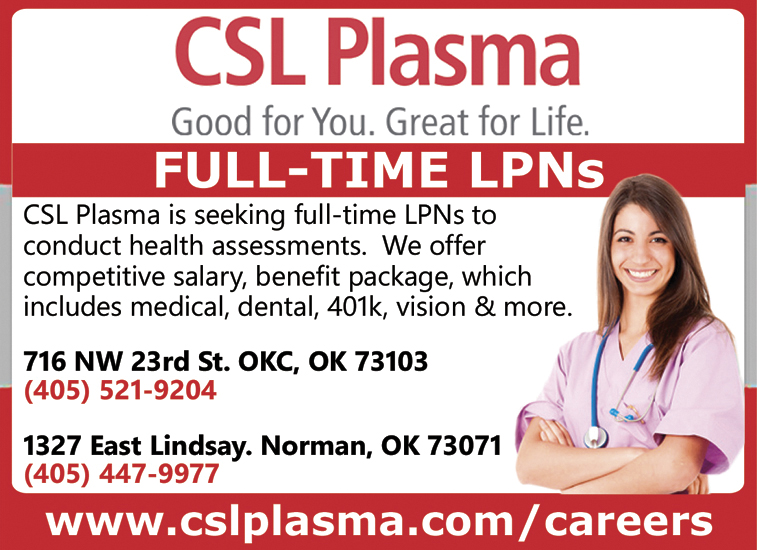