He has spent 22 years training to fight for his country. Now, instead of firing a high-powered rifle at enemy combatants a thousand meters away, Craig Wheeler – a master sergeant in the U.S. Marines and father of four – is about to embark on a career focused on healing the wounded and comforting the sick.
Wheeler isn’t the only military man about to graduate from the University of Tulsa’s BSN program. After four years serving as boatswain mate second class in the U.S. Coast Guard, Daniel Chavarin is making a similar transition.
Essential skills for soldiering and nursing
For both men, military training provided skills and attitudes that have proven valuable for their nursing studies. “The biggest thing I learned in the Coast Guard was adaptability to change,” Chavarin says. “I also learned about leadership and communication. Nurses must be able to lead a team and advocate for a patient’s needs. You also have to be there at the bedside, listening to and communicating with your patient, trying to understand their goals – for life and treatment.”
Wheeler echoes his friend’s insights, adding that in the Marines “my job required me to learn a lot of complex things very quickly, and use them in challenging and dynamic situations. Both soldiers and nurses require this skill.”
Core values
Part of nursing is about skills; part is about core values: “If you’re not here to provide compassion and care to a patient, then you’re here for the wrong reason,” says Wheeler. “Anyone coming into this field needs to provide care and dignity for a patient who may have given all their vulnerabilities to you. You need to be able to take those vulnerabilities and be protective of them. And be vulnerable yourself, as well.” Chavarin expresses similar sentiments. Toughened on the exterior from years of chasing down drug smugglers and other criminals on the high seas, on the inside this father of two boys reveals an unexpected tenderness when he speaks of the affective dimension of nursing care: “The biggest thing you have to realize is you have to give part of yourself up to help take care of people who rely on you to be there for them. If you can’t do that, you’re going to fail at this job.” Chavarin pauses and continues, “we have to give our utmost respect and love to these patients in order to give them the best treatment and outcomes they deserve.”
Two nurses, two futures
Despite their similarities and what they both describe as a “brotherhood” discovered during their nursing studies, once they receive their diplomas Wheeler and Chavarin will pursue different paths. For the Marine, a new life as an ensign in the U.S. Navy will open up. After that, Wheeler foresees coming back to TU to become a nurse practitioner (NP) and then returning with his family to his roots in western Oklahoma to set up a country practice.
For the former Coast Guard sailor, however, civilian life beckons. Chavarin plans to stay in the city (his wife’s hometown), where he recently accepted a position in the emergency department at St. Francis Hospital. “My nursing path is in critical care,” says Chavarin. “Maybe someday I will look into becoming an NP. For now, though, I am eager to acquire specialized certifications, such as CFRN (certified flight registered nurse), and to build a career working in medical, surgical or trauma ICUs.” https://healthsciences.utulsa.edu/nursing/ 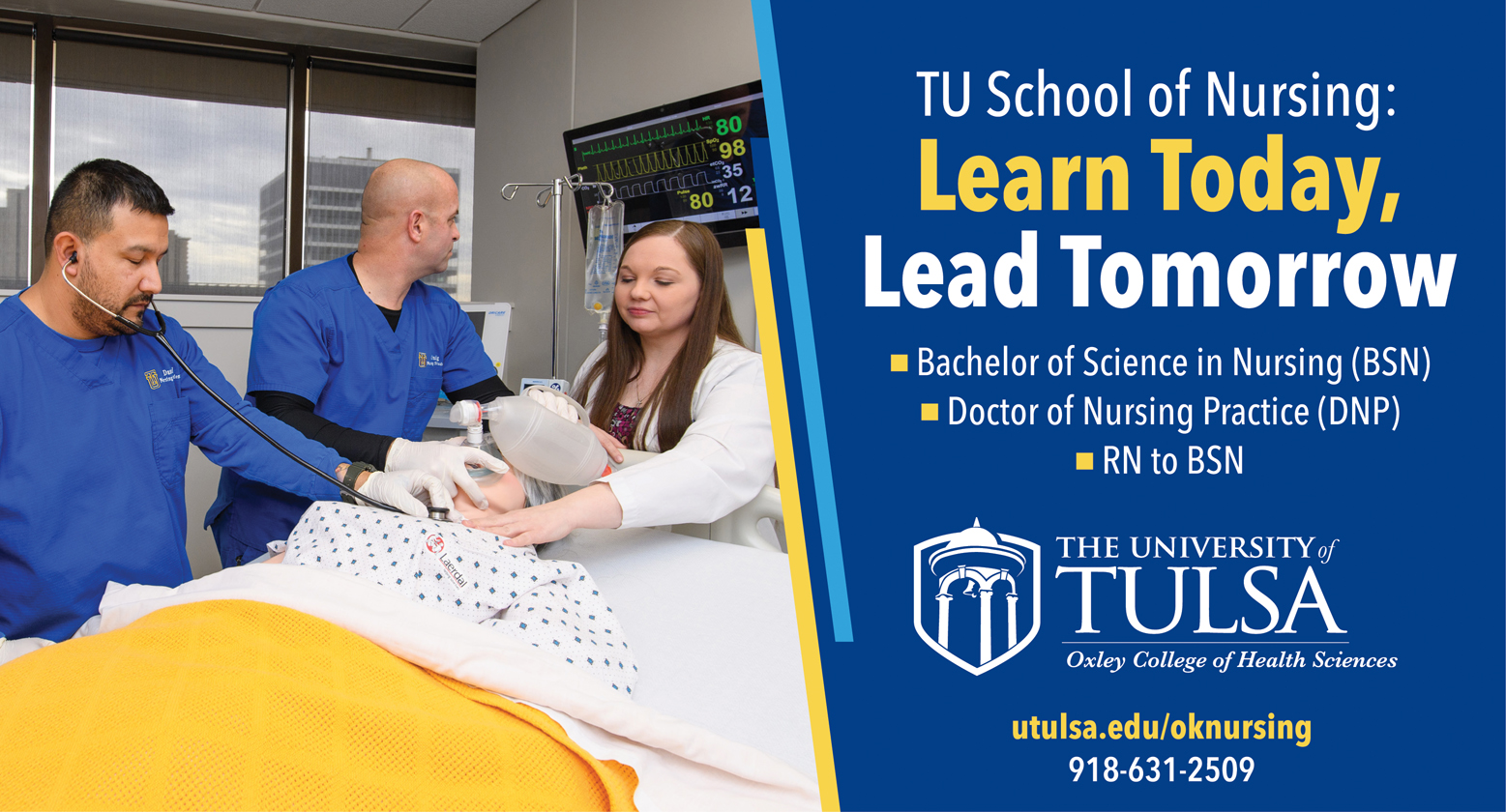