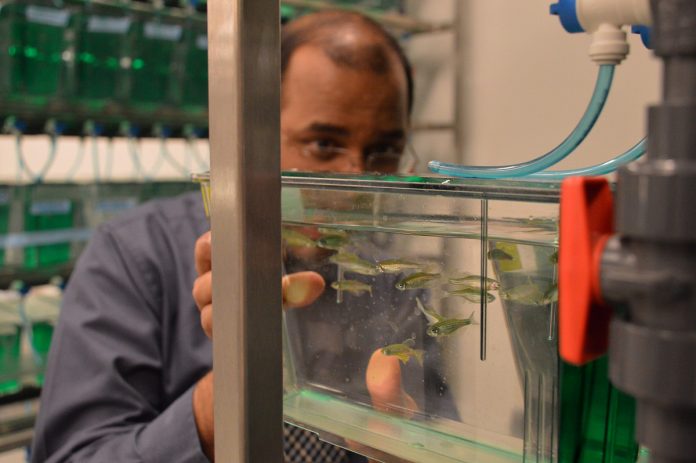 If you didn’t know better, you might confuse the fish-tank-filled room on the fourth floor of the Oklahoma Medical Research Foundation for an aquarium. Or a pet store.
But the 10,000 or so zebrafish that occupy the hundreds of tanks in OMRF’s Oklahoma City campus are not pets. The creatures, which grow no more than a few inches in length and are named for the black stripes that run the length of their bodies, play a key role in OMRF scientists’ search for new treatments for cancer.
When David Jones, Ph.D., arrived at OMRF last year to lead its Immunobiology and Cancer Research Program, along with his laboratory equipment, he brought zebrafish. The creatures serve as sorts of living test tubes, allowing scientists to study biological processes in ways that are impossible in humans.
“They reproduce frequently, and they develop into adults in a matter of days,” said Jones, who holds the Jeannine Tuttle Rainbolt Endowed Chair in Cancer Research. “And their bodies are transparent, allowing scientists to observe their developing cells.”
Sharing 70 percent of humans’ genetic code, the fish have become increasingly popular experimental models for scientists, particularly cancer biologists like Jones. At OMRF, Jones uses the fish to study the more fundamental elements of what’s happening inside cancer cells and how molecules work at their most basic level.
Jones’ work with the fish has helped him identify four different compounds that appeared promising for the treatment of colon cancer. Those findings ultimately led to clinical trials of experimental drugs to treat human colon cancer patients. “All thanks to a fish,” said Jones.
At OMRF, Christopher Sansam, Ph.D., is using the fish to study quality control in cell division, research that could have implications for both cancer and the prevention of birth defects. Going forward, Jones, who also serves as deputy director for translational research at the University of Oklahoma’s Stephenson Cancer Center, plans to utilize the fish to answer biological questions that reach beyond the field of cancer.
“We think there are as many as 30,000 human genes, and 30 percent of those we know nothing about,” said Jones. “With zebrafish, we have a powerful tool for trying to figure out what, exactly, those genes do.”
Jones’ enthusiasm for this model has been embraced at OMRF. With funding support from Tulsa’s H.A. and Mary K. Chapman Charitable Trust, OMRF spent nearly $1 million to create a state-of-the-art facility to allow Jones and other researchers to breed and study the fish and their genes.
“This is the first functional genomics fish core facility in this region of the country,” said Sai Tummala, D.V.M., OMRF’s director of comparative medicine and attending veterinarian. Tummala oversees operation of the facility, which uses a wide variety of filters, dosing tanks, pumps and temperature regulation technology to ensure an optimal environment for the fish to reproduce and develop.
“The technology also allows for peak water usage efficiency, keeping waste to a minimum,” said Tummala. OMRF uses only 200 gallons of water per day to operate the entire facility.
The equipment currently in place can service at least another 60,000 fish without adding any additional pumps or filters. Jones, for one, hopes that interest among other OMRF scientists will help the facility reach capacity.
“I’m trying to help other scientists understand just how valuable zebrafish can be,” said Jones. “I’ve seen for myself that there is truly no limit to the impact this little fish can have on research and unraveling the mysteries of human disease.”