Felicia Jones’ pastor spoke words that changed her life when she was a 40-year-old. He said, “The optimum job is to do something that you would do for free if you could afford to do so.” Jones already volunteered with Meals on Wheels and realized she needed to go to nursing school.
She was a successful bridal shop owner taking care of her mother who was living with Amyotrophic Lateral Sclerosis. ALS is a progressive nervous system disease that devastates the central nervous system, causing loss of muscle control. (story continues below)

Jones discovered a whole new world during her first day at the Moore/Norman Technology Center. She was one of the oldest students there in 1990.
At first, she considered being a pediatric nurse. But she fell in love with her clinical studies at St. Anthony Hospital’s geriatric/psychiatric unit.
Today, Jones serves as the staffing coordinator for The Wolfe Living Center at Summit Ridge, founded by the Seventh-day Adventist Church in Harrah.
“I love older people. I’m Chickasaw Indian and we take care of our elders,” Jones said.
She spent six years working in the Alzheimer’s unit of what was then-Oklahoma Christian Home (Bradford Village). She also did hospice there. God had revealed to her she could do mission work for the least of His children in Edmond.
“I got to rub the feet of missionaries, ministers, people who had served the Lord all of their lives,” Jones said.
She found peace working in hospice. Jones recalled an elderly man who was a member of the Disciples of Christ Church who did a Bible study. He developed congestive heart failure and the doctors said he would not make it. So, his family was called to be at his side.
“I could see the signs it was happening. I would just stroke his hand and remind him that Jesus said, ‘In my father’s house there are many mansions.’ I said trust. ‘You always trusted. Now is the biggest trust.’ And so, as he was dying and I was stroking his arm, he would open his eyes and say, ‘Am I dead yet?’ And I would say no and sing to him.”
Finally, after three or four times of repeating himself, the man closed his eyes and opened them, followed by a deep exhaling of breath.
He looked up and he was gone, Jones said. But Jones knew in her heart where the gentleman had gone. She would sing “I’ll Fly Away” at his funeral to honor his request with his son-in-law playing the banjo.
Her career lovingly spanned different places from there, including memory care at Epworth Villa in Oklahoma City and did end-of-life care for then-Grace Living Center (The Timbers) in Edmond. In Wichita, Kansas, Jones served as an activities nurse, driving a bus to the zoo and picnics.
She returned to Oklahoma City and worked at FountainBrook Assisted Living and Memory Care until her son Daniel was diagnosed with Huntington’s disease at age 29. Huntington’s is a progressive brain disorder caused by a defective gene. She had adopted Daniel from DHS when he was 8 months old. Huntington’s disease ravages the central area of the brain, which disturbs movement, mood and thinking ability.
“It got to where I couldn’t work like I wanted to because I wanted to take care of him as long as I could,” Jones said.
After four years after Huntington’s had progressed for Daniel, she could no longer give him the specialty care he needed. She found a place to assist Daniel.
She became a CNA instructor for MedNoc Training College in Oklahoma City where she found an opportunity to speak about Huntington’s with her students. She told them that they will encounter more people living with Huntington’s disease than she ever had.
“I still get calls from them saying, ‘I met my first Huntington’s patient. I remember what you said about Daniel,’” Jones said.
She discovered that Huntington’s had already surfaced in her son before age 20, but she and her husband didn’t realize it.
“I am writing a book about Daniel’s journey and how we didn’t know what was going on,” she said.
Daniel passed away while she was working at MedNoc. Her students attended Daniel’s funeral.
Jones took a break from nursing before accepting a job training directors of nursing at Belfair of Shawnee. In February of 2020 Jones retired.
“Then COVID came,” she said. “And I thought I should be there helping.”
Faithful to serve, she came out of retirement to serve as the staffing coordinator from 10-12 hours a week at The Wolfe’s Living Center at Summit Ridge.
Jones is also a non-denominational minister and helped share the Gospel. And she’s a nurse recruiter and assists the staff with the schedule.
“Our leadership team is one family. We really work well together,” she said. “We have devotionals, we pray for the residents.” 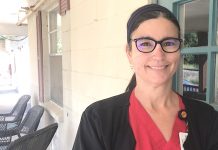 A comforting friend – Director of Nursing is a friendly face 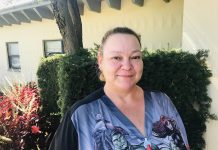 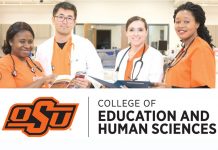 Learning on the front lines – OSU