When it comes to measuring obesity in American Indian youth in Oklahoma, the numbers are in and they show work still needs to be done.
That’s the conclusion of recently published findings by researchers at the University of Oklahoma Health Sciences Center in collaboration with the Native Youth Preventing Diabetes Coalition.
Researchers found that 63 percent of the American Indian children surveyed met criteria for overweight or obese. That’s twice the national average.
“We wanted to know why they were obese,” said researcher Michelle Dennison-Farris, L.D. “What behaviors are contributing to this trend? And how can we change it?”
The findings are based on a study including 124 American Indian children, between the ages of 7 and 13, in Oklahoma. It uncovered some behaviors that might be at least part of the problem, among those was the consumption of sugar-sweetened beverages.
“We found that these kids consume about 309 calories per day of sugar-sweetened beverages, which offer little nutrition and extra calories. That is significantly higher than the national average of 178 calories per day of these beverages,” said Dennison-Farris.
In addition to the increased consumption of sugar-sweetened drinks, the study revealed the amount of exercise in which the children engaged also had room for improvement. It is recommended that children get 60 minutes of moderate to vigorous physical activity each day. The majority of the children in the study, though, fell far short of that number.
They were getting only about four and a half hours a week of moderate to vigorous physical activity; and only 32 of the children surveyed – that’s about one in four – were meeting the physical activity guideline of 60 minutes per day,” said fellow researcher Susan B. Sisson, Ph.D. of the OU College of Allied Health.
“We were surprised by the outcomes, not only the amount of calories consumed by sugar-sweetened beverages, but the variety of beverages involved. These children consumed high amounts of fruit drinks, sports drinks, sweetened tea and soda” said Dennison.”
Sisson added the survey brings important insights into some of the reasons why American Indian children are at increased risk for certain diseases, particularly obesity and diabetes.
“Knowing the facts is just the start,” said Sisson, adding that more research is needed to evaluate other circumstances that may impact health behaviors in these children, such as emotional or psychological factors and peer pressure.
The research is published in the online edition of the Journal of Community Health. 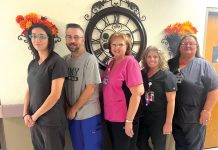 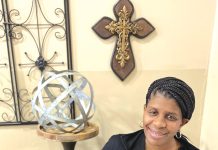 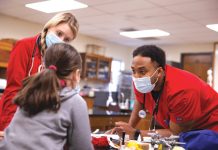 NURSE TALK: Are you a night owl or a morning person?