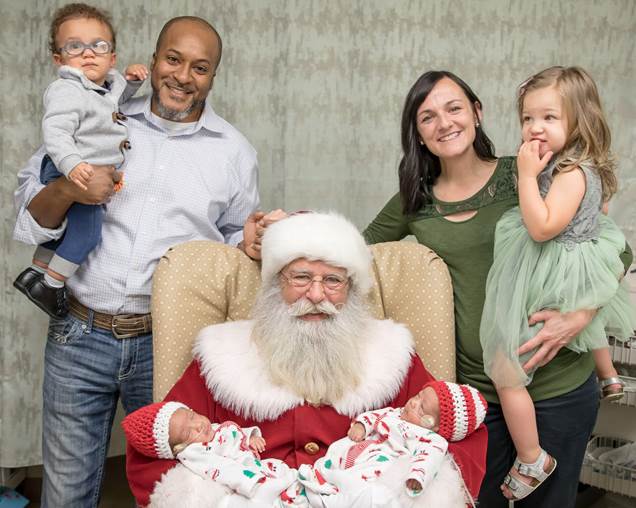 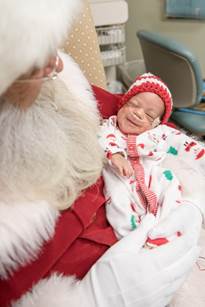 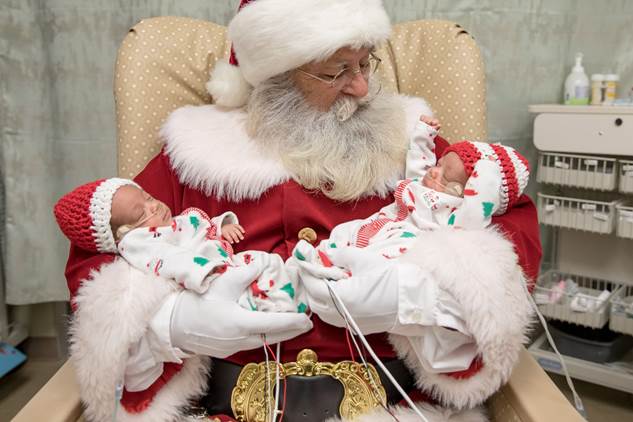 photos by A. Sims Photography LLC of Yukon

Some of Santa’s best presents aren’t found under the Christmas tree, they’re experiences shared with the people you love. Here’s one family’s story of joy … courtesy of Old Saint Nick.
Nuncia and Dion Hall struggled with infertility for five long years. They wanted desperately to have a baby and start a family of their own. When it became clear to them that having a biological child was not an option for them, the Halls lovingly and wholeheartedly decided to adopt.
They adopted a beautiful baby girl named Leya two years ago and then adopted a bouncing baby boy named Dominic a year later. And as fate would have it, as it often does in stories like these, when Dominic was only two months old the Halls discovered they were pregnant – not with just one baby but twins!
Since multiples have a tendency to come early, Nuncia was put on total bedrest at just 24 weeks gestation. She would spend the last 20 days of her pregnancy in the hospital. Twin boys, Xavier and Vincent, were born on Oct. 9, 2017. They were two months premature and barely weighed 3 pounds each. The good news though, is that other than their size, they were relatively healthy.
The tiny pair continues to grow but will remain in the neonatal intensive care unit of INTEGRIS Children’s at INTEGRIS Baptist Medical Center until their lungs are fully developed. This means they won’t be able to go home until after Christmas. Santa knows spending the holiday in the hospital is no fun, so he paid the twins a special visit last week.
“Having our boys in the NICU has been challenging for the whole family, especially during the holidays,” says the twins’ mother. “We are so grateful for the NICU staff at INTEGRIS, they take amazing care of our boys and work hard to make sure we get to enjoy special moments like seeing Santa!”
But perhaps the biggest gift given to the Hall family that day, was that Leya and Dominic got to meet their baby brothers for the very first time. Children, even siblings, under the age of five are not typically allowed in the NICU. But an exception was made and the Halls were able to take their first ever family photo. Little Leya even got to hold one of her brothers!
It was a magical moment enjoyed by many that day, as the Big Man in Red brought Christmas cheer to several families spending Christmas in the NICU this year.