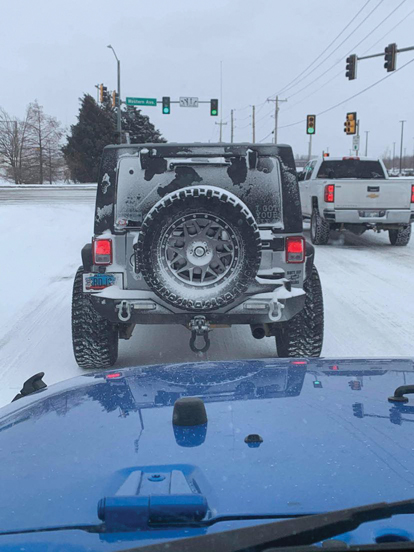 As Mother Nature ramped up and roads became perilous, a local group recently helped metro nurses shift into four-wheel drive.
The term “essential personnel” should now officially include Chris Watham and his nearly 800 friends in the Red Dirt Jeep Club who gave more than 300 free rides to work after the winter weather hit.
“I can’t take credit for this. I saw it on a group page Northeast of us,” Watham said. “A year ago, they did it one stormy night. You know, me and my wife were sitting here thinking ‘why couldn’t we do this.’”
The idea of setting up a hotline to coordinate rides came to fruition within 48 hours. Watham put out the call to the club’s membership.
“I immediately had about 10 that said ‘let’s do it,’” Watham recalls. “The rest slowly trickled in.” (story continues below)

That was February 11 just a few days before the storm was slated to move in.
He put the word out to local hospitals about what the group was planning and set up a Google Voice number to handle calls and texts coming in.
Watham’s wife, Megan, initially began manning the phone. She was quickly overrun with requests and had to recruit two helpers as two more lines were added.
“The first and foremost in my and my wife’s minds was safety,” Watham said. “I wanted our drivers to make sure they handled the snow. A lot of them are transplants from the north – Ohio, Detroit, Chicago – so they’re comfortable. We wanted to follow CDC guidelines and make it as safe as we could hauling strangers in a strange vehicle.”
Watham said through the group’s work with various local non-profits like the Jaxon Kade Foundation and Caring Cradles the club’s name was already familiar with a lot of nurses.
“A lot of NICU nurses I ended up hauling already knew about that and the club by that,” Watham said. “We always try to strive to have a positive influence in the world. It put most of our riders at ease.”
Watham lost count on the number of calls and texts.
“I think it was awesome,” Chris said. “Our riders loved it. When I was manning the phones and calling back I can’t remember the number of peers we heard on the phone that were so grateful to have help and were so worried about getting to the hospital because half of their numbers were decimated by call-ins or Covid. They loved it just because they knew for a fact they could get there and get home.
“I had several tell me ‘you don’t understand how much this means to us.’”
Watham wouldn’t allow any of the drivers to accept tips.
The furthest ride out of the metro was Choctaw. A few calls came in from Calumet and Pauls Valley but there weren’t enough drivers.
As the weather worsened, calls came in from Tulsa and then eventually Dallas and Fort Worth.
“I’m not sure how word made it down there,” Watham said.
Trista Matthew, RN, already knew her upcoming shift was going to be tough. Carrying the charge nurse phone for three ICUs on likely a short-staffed day, Matthew was preparing for the stress.
But she was more concerned about forecasts calling for nearly 15-inches of snow and how she was going to make it to work.
She heard about the offer on an ICU Facebook page. She texted the number and they called her back and scheduled her ride.
“My normal drive takes about 25 minutes and my ride picked me up in Northwest Oklahoma City all the way from Piedmont to drive me to OU,” Matthew said. “She was super nice and flexible with picking me up, which was very helpful since we got put on a code yellow and I couldn’t leave until about 9:30 p.m. when it was officially decided there was enough staff to cover night shift.”
Matthew said her rides were uneventful, as they avoided I-44 and drove Northwest Expressway to avoid the I-44 bridges.
“That road is awful on a good day,” she said.
She said the rides were a blessing on an already stressful day.
Watham said he doesn’t have plans to do the rides on a regular basis but things can change.
“I know my crew is gung-ho. If there’s a need for it again and we have real bad weather (maybe),” Watham said. “It was a ton of work, a ton of time, and a ton of gas spent.
A Jeep club in Tennessee contacted Watham shortly after word got out.
“They’re going to do it,” he said. “I got the idea from another Jeep group. It’s so cool we can pass it around. It’s just the right people in the right places.”