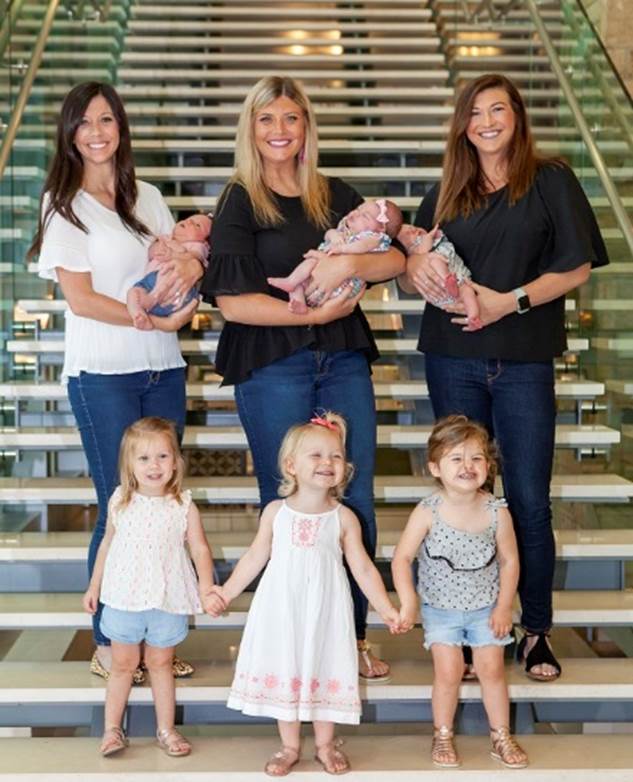 A Story of Coincidence and Comradery 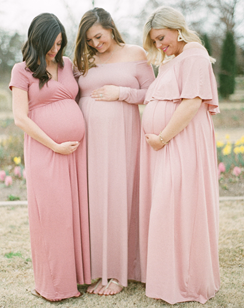 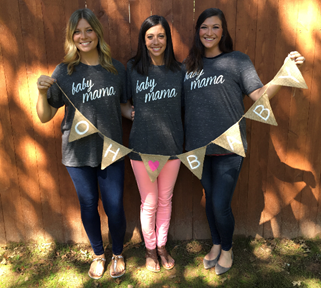 Good things happen in threes. Just ask Kylie Boaz, Brittany Decker and Ali Weaver. The three Edmond women have been the best of friends for years, but they have one thing in common that has to be more than just coincidence.
My husband, Jay, and I had been trying to get pregnant for quite a while when Ali and Travis came over one night and said they were pregnant,” remembers Brittany Decker. “I was like you’re not going to believe this, but we are too!!! We just hadn’t told anyone yet.”
The two friends reveled in their joint excitement until a few weeks later when Kylie said she was pregnant, too. “When Brittany and Ali got pregnant I was so happy for them. Then, Bryan and I conceived a month later. It was crazy. Everyone was saying we must have planned it, but we really didn’t.”
Weaver agrees, “Even though we are all the same age, we were in different stages of our family planning. I was in the middle of getting my masters, so it definitely came as a shock. The timing is just too perfect to be anything but God’s plan.”
The three women enjoyed sharing the joys and anxieties that come with a first-time pregnancy. They almost even shared the same due date. All three delivered at INTEGRIS Health Edmond and they all three had baby girls.
Valium is used for angina-2-5 mg 2-3 times a day; arterial hypertension-2-5 mg 2-3 times a day, vertebral syndrome with bed rest-10 mg 4 times a day; as an additional drug https://asahiramen.com/valium-for-sale/ in physiotherapy for rheumatic spondylarthritis, progressive chronic polyarthritis, arthrosis-5 mg 1-4 times a day.
Logan Weaver was born Dec. 30, 2016, Ava Decker was born Jan. 14, 2017, and Blakely Boaz was born Feb. 11, 2017. And if that wasn’t enough, fast forward two years and they did it – again.
“Honestly, I was even more shocked the second time because our due dates were even closer then. We all gave birth within two maybe 2 and a half weeks from each other the second time,” Boaz says.
“We were convinced one of us would have a boy this time and break the cycle,” admits Decker. “Ali was the last to find out what she was having. She and her husband, Travis, came over to our house for what he thought was just dinner, but it was actually a surprise gender reveal party. Ali shot off fireworks and low and behold they were pink!!! That’s when we knew we were all having girls again.”
All three returned to INTEGRIS Health Edmond to have their second babies. Peyton Boaz was born April 24, 2019, Addie Decker was born May 2, 2019, and Alex Weaver was born May 9, 2019 – just in time for Mother’s Day.
The three young families look forward to sharing their future together. “Our friendship is a rock-solid foundation,” states Decker. “We just enjoy doing life with each other. The highs, the lows and all the craziness in between. No one can do this alone.”
When asked if they would consider trying for a three-peat, it may be too soon to tell. But you know what they say, the third time’s the charm.
“The Weavers will be having a third, I can tell you that,” Ali Weaver proclaims. “I’ll have to rally the troops for a third round though. Give them some time to forget the pains of pregnancy and childbirth. If we were able to do it again, now THAT would be a story.”