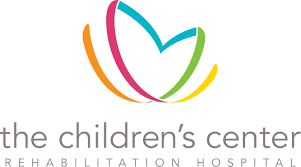 Melissa Richey is the Director of Communication and Marketing at The Children’s Center Rehabilitation Hospital. It’s no surprise that she was a hard worker with high goals in school. Melissa went to the University of Central Oklahoma for public relations, market advertising and broadcasting. She was a natural when it came to public speaking and storytelling. She soon began to shadow the journalists and news reporters at several news stations. She wrote scripts! The last minute deadline didn’t bother her at all; in fact, it was another challenge that she would accept and succeed. In charge of several advertising campaigns, she had quite a few clients. Little did she know that the time spent in marketing and communication was preparing her for the next job she would take; It was seven years ago that Melissa accepted the position of Director of Communication and Marketing at the Children’s Center Rehabilitation Hospital.
“Working here at the Children’s Center is wonderful.” Melissa said. “I have a strong connection with the children and their families. I feel honored to walk with the children from the moment they arrive until the moment they leave and all the time in-between. I see their lives unfold as their heartfelt stories of strength and survivals are told,” Melissa commented. “It is such a joy to be a part of their lives,” she added.
With Melissa’s excellent work through the years, she has received several outstanding awards; The Journal Record 40 Under 40 Award, Oklahoma City Magazine 40 and Under Award and the Inaugural Chic Davis Outstanding Award for National Advertising. Quite an accomplishment!
What is your strongest asset here at work? “It would be the way I am able to collaborate with different people and bring different ideas to the table. Sometimes, I think I make a good bridge as I bring everyone together,” Melissa replied.
Melissa is married to her wonderful husband, Kyle, who is a girl’s high school Basketball Coach. They have a nine-year old son, Kyle, who plays basketball. It is obvious that one of Melissa’s hobbies include watching basketball. She also enjoys reading, storytelling, writing, working out and traveling.
When I asked Melissa to describe herself, she said, “I am driven, loyal, compassionate and a little on the quirky side, even though a lot of people don’t know that,” she said with a smile.
Melissa’s words of wisdom seem to describe her perfectly; “Being here at the Children’s Center and being around children, I have to have faith and grace. Sometimes, I have to remind myself that there is a bigger picture, stay the course and know that God has it all.”
Summing up Melissa’s life in one word? “That’s easy,” Melissa said. “BLESSED.”