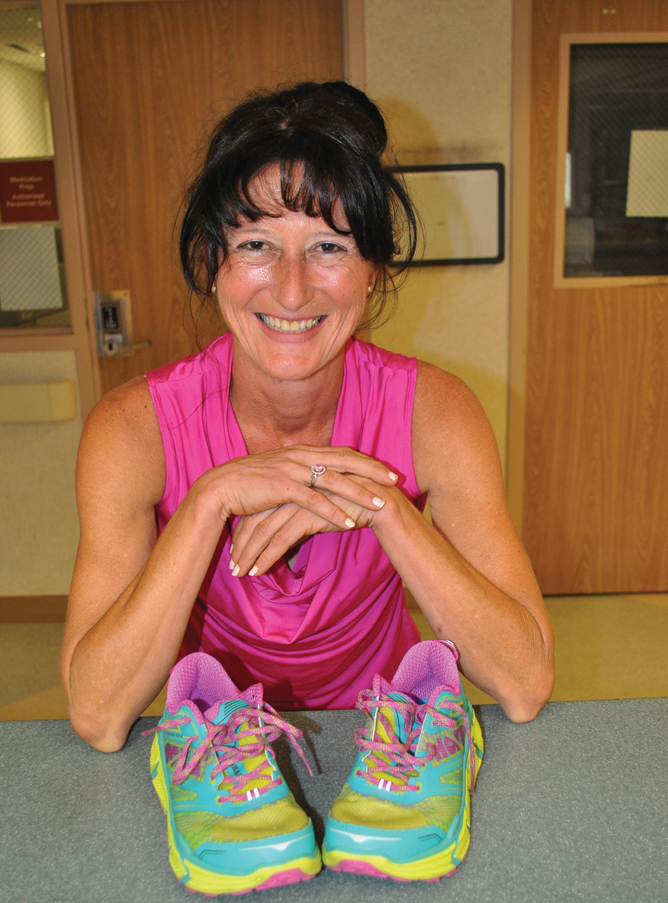 A few years back, Kim Peterson faced the classic mid-life crisis.
Bad marriage, bad health, altogether bad outlook on life.
So she truly had reached a crossroads.
Option one was to continue down the path she knew for what she already had.
Option two was make some radical changes and roll the dice and see what happens down the road.
Peterson quite literally sprinted down that road and hasn’t looked back, finishing the Boston Marathon earlier this year and securing a new lease on life.
“(Running) has improved my health, my mood and every part of my life,” Peterson said. “I have more patience, more tolerance. I feel better and when you feel better you interact with others better. You see the world more optimistically. I can turn any negative into a positive.”
That’s a plus for anyone but particular someone in her line of work. Peterson is a licensed alcohol drug counselor with a mental health endorsement who has worked for AllianceHealth Midwest more than five years.
She’s the longest-tenured mental health counselor in the building.
Searching and hoping for change she began running.
She started with 5k runs for the first couple years.
Her sister, who worked for 7-11, called to ask if she wanted to run in the Oklahoma City Memorial Marathon.
The options were 5K, 10K and half marathon.
“Being a smart aleck I said ‘I’ll do the half marathon if you will,’” she said. “She signed us up so I had to start training.”
Peterson had no idea how to train for a distance of 13.1 kilometers, which translates to slightly more than eight miles.
She just ran it. And she’ll be the first to tell you she botched it.
“I hit the wall,” she said. “I didn’t get anything to eat or drink and that is an amazing experience. I think it might be worse than a heart attack. I finished and I remember laying on the asphalt … I was crying and I thought I was going to die.”
She had depleted pretty much every electrolyte in her body.
And she almost depleted her will to ever run again.
It took her a couple months for her mistake to really set in.
She thought maybe she could prepare differently.
So she decided to try another run.
“Then I got addicted to them,” said Peterson, who was an All-State runner at Western Heights growing up. “I started getting pretty decent then I ran a full marathon.”
Coalgate was the site of her first marathon.
The mud-covered course was laid out over a mustang ranch.
She’ll never forget the herds of wild mustangs that ran beside her. For nearly two hours she was as free as they were.
She’s been hooked on the adrenaline ever since.
Earlier this year she tackled the vaunted Boston Marathon.
The trip resulted in a personal record time.
“Probably one of the things that stood out to me was the amount of Olympians that were there … it was just amazing,” she said.
Running hasn’t been the only change she made.
She decided to enter a bikini contest.
“I just get craziness in my head,” Peterson laughed. “I want to practice what I preach to patients. I always tell them not to limit themselves. If you want to set your mind to do something do it. Every day things happen that I don’t believe. I never would have believed I could have run a half marathon.”
“You couldn’t have told me I would put on a bikini and get on a stage and I got a fourth-place trophy.”
Now Peterson is a fit, fabulous and fetching woman in charge of her life who inspires others every single day.
She’s become the official health mascot among hospital employees. Everyone wants to know what she’s eating for lunch that day or what she’s going to do after work.
It’s no strange occurrence for Peterson to get up and run eight miles. She averages 30 miles a week. Her next goal is to run first place in her age-group at next April’s Oklahoma City Memorial Marathon.
“Anybody in the hospital who wants to get on a health kick, whoever wants to do it I’m more than willing to help them,” said Peterson, who is also a certified equine therapist.
And Peterson is living proof that sometimes a crossroads in life can be the opportunity for something amazing.

NURSE TALK: What is your favorite Christmas tradition? 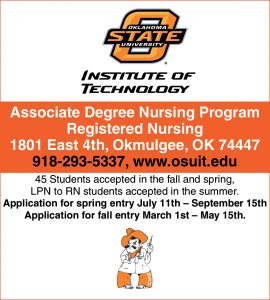