This initiative began two years ago, when the FNP program’s director, Sheryl Stansifer, learned that many students at Will Rogers were returning to school in August without a completed sports physical. The lack of such a physical, which typically costs $20 or more, means a young person cannot participate in school sports.
The first year Stansifer and her FNP students went to Will Rogers, they completed 160 physicals. The next year, that figure climbed to 200. The school’s athletic director, Krystel Markwardt, enthused about the impact of “this wonderful program,” noting that “our students come from diverse economic backgrounds, and their families couldn’t afford to pay for physicals. The FNP students work quickly and efficiently, and their efforts mean our athletes are able to compete in the summer and be prepared for early fall sports.” As Stansifer pointed out, the issue is “bigger than playing basketball or joining the swim team. For many kids, getting involved in sports means they will stay in school and graduate.”
The benefits of this service-learning project are tangible for both the young athletes and the FNP students. Sports physicals are a common component of primary care, and all of TU’s FNP students must complete pediatric assessments and be checked off on sports physicals. Providing sports physicals to the Will Rogers students enables the future FNPs to satisfy that requirement. In addition, Stansifer commented, delivering these physicals “enables faculty members to assess FNP students’ interactions with the patients/athletes and their ability to complete the forms accurately. Because so many health care teams comprise a variety of professionals, having an opportunity to collaborate with the school’s athletic trainer adds a critical interdisciplinary component to their development.”
Two of the FNP students who participated in service learning are Alejandra Paredes and Vicky Cha. Originally from Peru (she moved to the United States when she was 13), Paredes has been a registered nurse (RN) since 2014. Cha is a first-generation Hmong-American who grew up in California. She has been an RN since 2015.
“I always knew my career end-goal was to become a nurse practitioner (NP),” Paredes said. “But I wanted to gain experience as an RN so I could become a better NP. I am looking forward to having more autonomy in the care that I deliver to my patients, and it’s important to me to be able to help them focus on health maintenance and disease prevention, while being mindful of individuals’ emotional, physical and spiritual health.” Cha has her gaze set on working as an FNP in urgent care. “Seeing NPs’ selflessness, commitment and integral role in patient care both inspired me and solidified my determination to pursue an advanced practice degree.”
For Paredes, one of the benefits of TU’s FNP program is the “huge relief” of not having to find a preceptor. She also cited the diverse network of clinical sites, which “serve as a great way for students to learn and implement their knowledge.” Paredes recently spent a semester at a clinic caring for a largely underserved population where most of the patients spoke Spanish, which is her native language. Cha has a similar interest in bringing health care to people who are often on the margins. “I admire the TU School of Nursing’s mission to not only cultivate students to become leaders in health care, but also to give back to their communities.”
This is something Cha experienced first hand with the Will Rogers service-learning initiative, and which resonated on a personal level. “My parents were Hmong refugees and I grew up with minimal resources. One of the biggest struggles was not being able to take part in sports because my parents couldn’t afford the fees and transportation. Providing free sports physicals for Will Rogers students, many of whom have a background similar to mine, exemplifies one of the most rewarding aspects of nursing: making a positive impact on another person’s life.” Reflecting on her experience providing physicals for these youth, Paredes arrived at a similar conclusion: “I believe that caring for others, regardless of social, racial or economic background, is a core value of nursing.” For more information visit: utulsa.edu/nursingdnpok 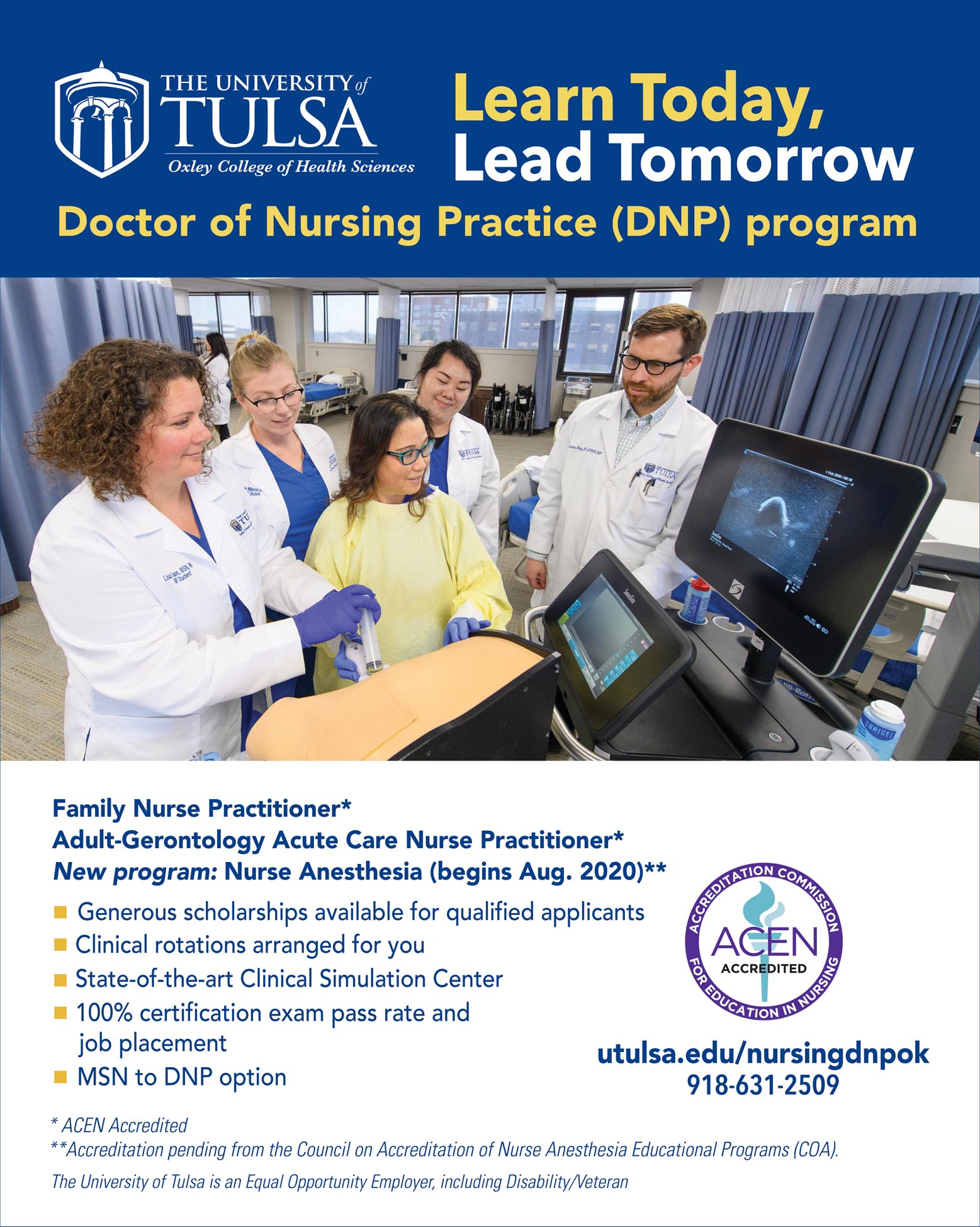